What to expect as a CA farmer?
A
Written by Anne
Updated over a week ago

Although soil cultivation with tillage and harrowing is a good and functional practice, there are still a number of positive effects of Conservation Agriculture (CA) which are interesting in most countries.

When it comes to cultivating the land, there are a number of savings to be made by not tilling.

If we look at the fuel consumption, 40-50% can be saved by converting to CA compared to tilling. The tilling prior to a winter-sown crop is not done, giving the farmer more time in the peak period of harvest. Finally, there are big savings on the machine balance as well.

Cultivating the soil according to the CA principles not only saves investments in tillage machines, but it is also possible to reduce the horsepower of the tractor. When a farmer tills, they need much more horsepower than other fieldwork like spraying, which can be carried out with a much smaller tractor.

Overall, there are big savings on the machinery side to be made by converting to CA. 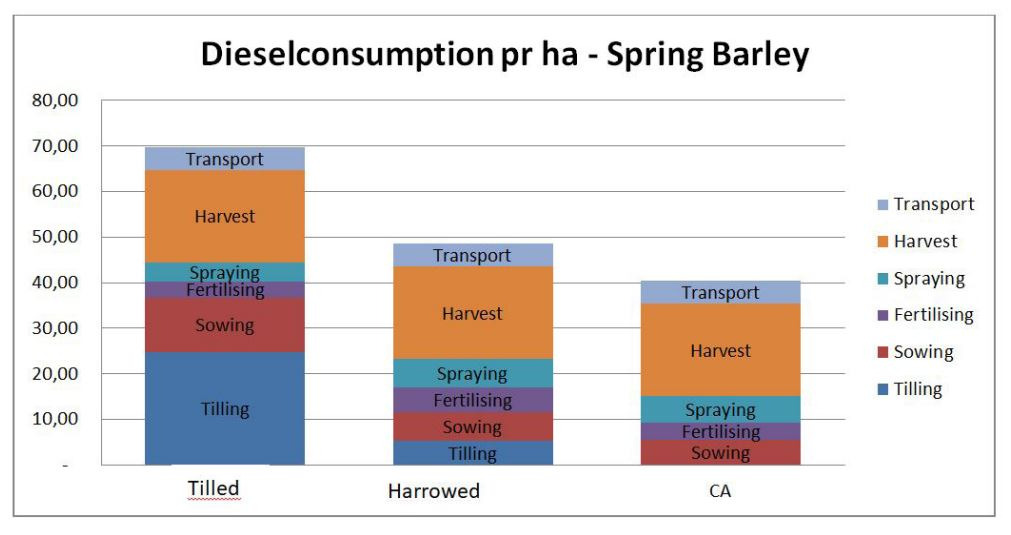 Comparison between the diesel consumption per ha when using conventional tillage, harrowing, and Conservation Agriculture approaches in the project "Green Fields & Strong Roots". As it can be seen, the consumption of fuel for tillage is a large part of the total consumption, especially in the plowed system.

Cost savings are easily lost if appropriate yields cannot be maintained. In Europe, there are not yet many long-term comparative studies of yields between CA and the more conventional forms of tillage-based farming. Many of the existing analyses have been performed on data that is not necessarily completely comparable, and there is therefore also great variation in the results.

Case studies in the project ”Green Fields & Strong Roots” from Denmark indicate that yields can be maintained at the same level in CA as in full tillage and min-tilled fields. There can however be large variation across tillage systems and crops from year to year.

There is a need for further studies, including more data both in terms of the number of included fields/farms, geographical location, and over several years. However, in general, the practical experiences are that crop yields can be maintained at the same level from CA fields as in the tillage systems. Moreover, there are large savings to be made on cultivation costs and hence an improved gross margin. 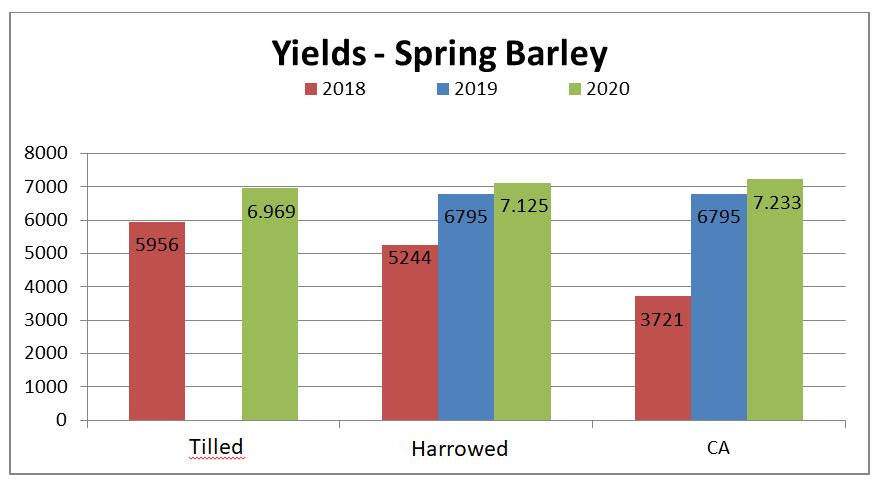 Results from yield measurements in the project "Green Fields & Strong Roots". The yield of spring barley over the three-year project period has been both the highest in CA and the lowest. Apart from the dry summer of 2018, CA has performed well in terms of yield in spring barley. For various reasons, there was no spring barley on the plowed farm in 2019.

In addition to the agricultural and economic benefits of CA, there are also a number of positive side effects. If we compare CA with tilled systems, CA maintains an increased biodiversity, a higher build-up of carbon in the soil, and an improvement of the soil structure. It is especially profound when we compare CA to intensive tillage and removal of crop residues and with no integration of cover crops.

In CA, the farmer aims to increase biodiversity levels. The larger population of insects and non-vertebrates in the soil promotes (among other things) the build-up of organic matter in the soil. One of the largest organisms in the soil is earthworms which are the most visible part of the many important soil terrestrial organisms. The earthworms contribute to the turnover of crop residues and the recycling of nutrients. In CA, macro soil organisms (along with cover crops) must take over the soil conditioning work from the plow and the harrow. 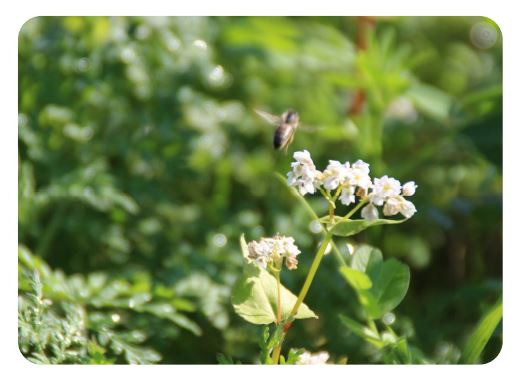 Flowering cover crops are coveted by bees and other insects.

However, increases in the number of terrestrial organisms can also have an effect further up the food chain. Many birds feed on worms, meaning there is more food for them in the CA fields. When the soil is left without tillage after harvest, there are also seeds and volunteer grains in the field which serve as a food source for the birds during autumn.

At the same time, the absence of tillage means that e.g. beetles and spiders have better living conditions. This is due to the fact that they and their habitats are not destroyed by annual tillage and they can live in the field all year round. Beetles and spiders belong to the group of organisms that are considered to be pest predators, as they feed on the insects that damage the crops. This includes aphids, which also occur in CA fields, but are often kept in a low number by predators and will therefore not reach a number that causes damage to the crop. As a consequence, it is not necessary to spray with insecticides.

Finally, stubble, crop residues and cover crops provide good opportunities for habitats in the field. Several studies from recent years show that there is significantly greater biodiversity in CA areas than there is in full tillage fields. 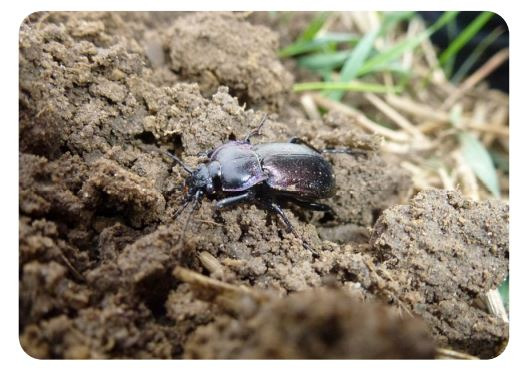 There are several large beetles in CA areas because they are not displaced by tillage.

The principles of CA contribute to an increase in soil carbon. It is known from experiments that several of the actions that are included in CA help to increase soil carbon storage potential. This applies with intensive integration of cover crops and application of plant residues (straw/crop residues are left in the field), while the absence of tillage in itself seems to have a limited influence.

During tillage, oxygen from the air comes into contact with the organic material in the soil and thereby increasing the rate of decomposition. The organic material is mineralized and nutrients along with CO2 are released. It is a known effect of tillage that the mineralization increases significantly shortly after tillage, while the effect over time appears to be of a lesser extent. Overall, there is consensus that the principles of CA lead to carbon storage in the soil, while the extent of carbon storage is still being discussed and requires further investigation.

The amount of carbon in the soil is one of the factors that are important for the soil structure. Since CA promotes carbon storage, this alone has a positive effect. As mentioned before, CA also has a significant positive effect on the population of earthworms and the occurrence of mycorrhizal fungi.

The earthworms shred the plant residues and mix them with the soil at the same time as they secrete mucus which contributes to the formation of stable aggregates in the soil. In addition, especially the large species of earthworms dig permanent passages in the ground, which helps promote both air exchange and drainage of the soil.

The mycorrhizal fungi secrete the substance glomalin which also helps to ensure the formation of stable aggregates in the soil and thus improve the soil structure. The mycorrhizal fungi form a mycelium which is a widely branched network of fungal hyphae. Through the mycelium, the fungus forms connections to the roots of the plants, including the crops, where the plants can exchange nutrients with the fungi for the benefit of both organisms. Plants are part of symbiosis with both fungi (e.g. Mycorrhiza) and bacteria.

When the soil is grown according to the CA principles, it also results in a more resistant or resilient cropping system. In other words, a greater external impact is required in order for problems to arise.

Another area where the CA system is more resilient is in terms of erosion. This is partly due to the fact that the soil structure gradually improves when the soil is cultivated by the CA principles. This is particularly due to the fact that the soil surface is protected by crop residues, cover crops, or a crop all year round. Surface erosion such as soil washout is very uncommon on CA fields.

Higher resistance to both heavy rain and drought

Finally, water ponding is rarely seen on CA fields. This is partly due to better water infiltration owing to the better soil structure and more macropores, but also that the soil cover protects against soil erosion. International experience also shows that CA provides increased drought resistance. This is a result of better soil structure and thus better water holding capacity. The constant plant cover also decreases the evaporation from the soil.

The improved soil structure together with the soil cover causes the trafficability of the field to increase considerably. It can never be recommended to drive unnecessarily in the field during periods of heavy rainfall, but if necessary, it is often experienced that a CA field is left completely without a trace, while conventionally tilled fields may experience damage caused by traffic.

You cannot expect to achieve those results right after the switch to CA but most people will find that as biodiversity increases, pest infestations become less severe and insecticide treatments can be reduced when the farmer has practiced CA for some years.

Did this answer your question?